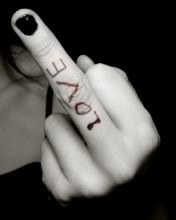 Good EEEEEEvening. It’s been a long time. I’ve been, how do they say, lunchin’ on the blog tip. Been working on my tweet game. My tweet game is popping, btw. @QueenEnvy, in case you were curious.

And so, welcome to the new year. Welcome to 2012. You ready to either save the world or watch it crumble to dust before our very eyes? You ready? Me neither. I just got here.

But I’m fidgety. I’ve been doing all kinds of cleaning. Some of it wasn’t even intentional. Folks just irked me so badly, I got scarce. My horoscope said I would. But whatever, horoscopes are bullshit. Mostly.

A few days ago, I found myself going through my twitter followings. Most of the folk I follow are a varied, indie bunch. They possess wit, sass, positive thinking and sometimes a bit of snark to share. Thinkers.

So, why when I searched those prized 600+, did I see the likes of Ludacris, Swizz beats, some model chic from some video, a slew of random ass rappers I can’t imagine add value to my Twitterico feed. And others. Diddy. 50 Cent, Rihanna, Kimora, Amber Rose, etc., etc, what have you. Not saying there’s anything wrong with these people if you follow them… well, whatever. None of my business.

Anyway. Once I got that tweet Funk Flex sent about Nikki Minaj and her boyfriend buying matching ghetto ass pink and red Bentleys O_o. And then that tweet Swizz shared about his three pairs of matching stupid shoes… there was way more, but my brain hurts trying to remember the retardation of it all.

Finally! Emphatically! I said, ENOUGH! I’m done. I can’t care about these people any longer! Did I ever? No. I’ve never, ever bought a Swizz album and I venture to deduce that I shall never will. Sic. Why was I following him? Um, because he’s married to Alicia Keys and I like her. Although I unfollowed her as well because, to be honest, I don’t really stay up nights worried about what she’s going to share onTwitter. I’d rather buy her next album.

But why was I following these “celebrities” to begin with? What value do they add to my timeline? The answer? None. The truth is, my following them adds no value to my life in the slightest. In most cases, being a fan of these folk AND following them on Twitter, causes me to no longer want to be their fan. Mostly because a lot of these folk are talented in lots of ways, but, apparently, not very bright. Or just plain old ignorant as hell. Either way, it’s awkward to watch.

So. I get no benefit from following these weirdos. But you know what my following them does do? It adds social media capital to all their other arsenals of capital. And why do I volunteer my much prized Social Media Capital (=SMC) to people who could give a care that I even exist? I don’t know.

The fact that I can’t answer that question with any amount of authority prompted me, rather militantly, to take my SMC back. Yes, like some rabid Indian giver. But whatever. I didn’t know what I was giving when I gave it to start. Did you? Do you know how valuable your SMC is? No matter. I’m not here to do a sociology class either.

Anyway, after my eureka moment, I went through and unfollowed all of the fuckers that really don’t matter to my Twitter timeline. Folks that aren’t following me back. Folks that don’t know that I exist. Folk who don’t answer when I stalk mention them 40 times a minute. Folk who are generally ignorant, gossipy, or just way too stupid. Or folk that while talented, I could give a shit about what they have to say. So now, my Twitter TL is utterly celebrity and moron free! And boy, is it refreshing to have a feed full of intelligent, interesting, witty and well formed convotweetions.

Yes, yes. I kept a few celebrity types. I kept Kanye because I keep him in check, and without my keeping an eye on him, he would just fly off the handle completely. Serious. Uncle Rush made the cut because, while utterly clueless about how the rest of the universe lives, he does share spiritual gems. There are a few others, but to name them would be redundant.

For the most part, I’ve kept and added Artists, Actors, Musicians, poets, scientists, philosophers, mathematicians, farmers, etc and what have you that I’m truly, truly a fan– people I would interview. People I want to know and read insight from. People with something relevant to say and worthy of my Awesome List. AND some people I just find clever. I literally kept the people I thought worthy of a voice and tossed the rest. Yes, tossed. Like a used condom. Bitch-boo-bye. Mean? Sure.

I’ve decided that my Twitter feed should only be filled with people worthy of a potential retweet. I’ve decided, people have to earn their way to that kind of status. “Earn my Affections”, like that Amel Larrieux song I love so.

You don’t just get a follow because you exist. That’s crazy. You get it because your voice is worth hearing. I, in part, gave you Celebrity or a place in/around/near celebrity-dom and far too many of you have taken my gifts and shanked ME with them. Bullshit in, bullshit out. I’m done with that. Give me quality or you get unfollowed.

And so I say all of this to say. You have to earn my follows. If I’m following you or following you back, you’re dope; I’m really hoping you are or you’ve added value to some joke I’m working on (and you’re the brunt of it). Or at least interesting to me. Or I’m being über courteous because you followed me first (and you’re not annoying). If I ever have to tweet why am I following ~~~> (and your name is after that arrow) you know the end is near.

Following someone is like investing in them. It’s like raising campaign funds saying this person is worth reading tweets from. We nobodies have to earn our capital the hard way– cultivation. Curation.

“Celebrities”, for the most part, get that capital because they’re celebrities. Whichever way they got that way tends to be irrelevant. It’s not because they add any value to our twitter feed, it’s because they exist on our media devices. Period. Even if what they put out is garbage by ALL standards. The bar for being worthy of a fan or a vote or social media capital has gotten so low, it’s embarrassing.

Particularly when there are utterly talented ppl who deserve my attention much more. Twitter is the easiest place to show support to great people around the globe who have something vital to contribute to our twitter feeds and our lives. It’s also the easiest way to release the morons from their twitter pointlessness. Do YOU really care about anything 50 Cent or Diddy has to say? Really? O_O. Are they contributing anything vital to your timeline besides hours long commercials about how much they got and how much more of YOUR dough must go to continue to support THEIR lifestyle?

It’s your support, that gives them that lifestyle. It’s your social media capital that keeps these baffoons relevant. So what happens when you shift that capital to people more worthy? For every Diddy you unfollow and every Dr. James Peterson you begin following, what happens then? The voices of power on Twitter shift as well. Just like #OWS, if we #occupytwitter, we tell the clueless assholes to go sit down somewhere and we let the ppl with something to say take stage. We take back our capital and by default, no longer need to be plagued by the foolishness in our tweet feeds. I’m just sayin.

The “Stop Being Famous” movement is underway. Let’s have value. Let’s be authentic. Let’s take back OUR say and relinquish theirs. What celebrities eat, we don’t shit. Their job is to entertain, inform, enlighten, inspire. If they ain’t doing none of that, kick em to the twurb. I did.

The moral of this story? Who knows. Just some food for thought. Thank you for reading this though. Peace and abundant twafoonary-free blessings. Love, -e-